Motorcycle Tyres: The Need-To-Knows - Part One 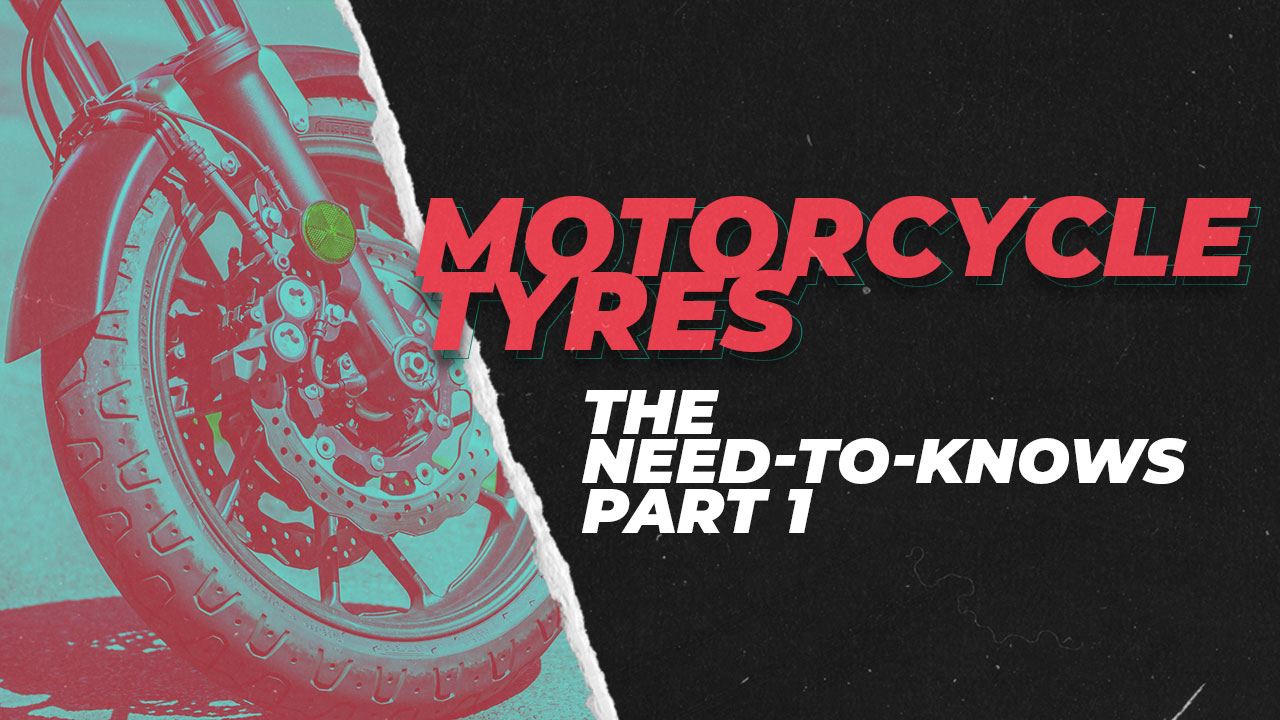 Motorcycle Tyres: The Need-To-Knows – Part One 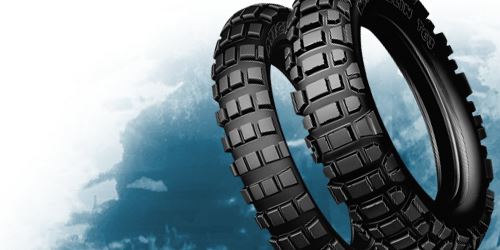 When you consider the amount of work motorcycle tyres do and the responsibility they have, you may wonder how they cope. The material they are made of provides the grip that allows you to lay down large amounts of power and torque, lean over at extreme angles at speed, and stop safely with the brakes applied hard. That grip is the difference between pleasure and pain and needs to work well in a whole variety of conditions.

Without good tyres the abilities of the engine, suspension and brakes are irrelevant. Tyres are massively important, and thankfully a lot of them are good, really good, especially when you consider how much of each one is actually in contact with the road. Makes you wonder – how do they cope with that?

Here in part one of our three-part feature on tyres we look at tyre construction, compounds, and tread patterns. In part two we look at tyre selection, and in part three tyre use and maintenance.

A tyre is all about construction, compound, and tread pattern. There are three main types of construction, but within each type there are many variations in design brought about by the development of advanced materials that allow manufacturers to excel in creating tyres optimised for specific uses. Competition between the manufacturers and the desire to be the best provides us consumers with a vast array of quality and specialised rubber to choose from.

Mr Dunlop initially lodged his patent for tyres in 1888 and he launched the Dunlop Rubber Company in 1890. The first tyres were made from natural rubber, but now they are virtually all made from synthetic rubber. The cords that form the carcass and structure are usually made from fibres such as nylon, polyester, rayon or Kevlar, woven together and coated with rubber. The construction details are often marked on the sidewall. The belts on radial and bias-belted tyres are made from steel or aramid. The choice and combination of materials for the carcass are selected to suit the requirements of different bikes and give different tyres their own characteristics. 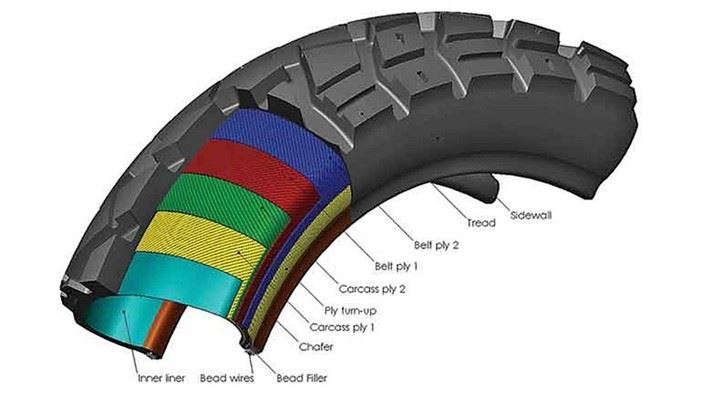 Cross-section of a modern cross-ply tyre 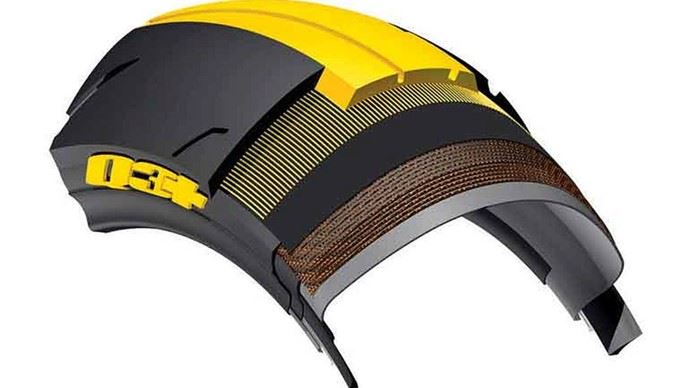 Cross-section of a modern radial tyre

The three main construction types in use today are cross-ply, radial and bias-belted.

Cross-ply:   The original and traditional design. The plies are laid diagonally to the bead in a criss-cross pattern. This gives even strength and flexibility in both sidewall and tread, providing a compliant ride suited to off-road bikes, older bikes, and to some cruisers, tourers and load-carrying bikes. They are generally cheaper than other tyre types but have a higher rolling resistance and are therefore likely to use more fuel and will build up more heat at speed. Unlike radial and bias-belted tyres, cross-ply tyres do not have a letter that denotes their construction type, so if there is no ‘R’ or ‘B’ marked on the tyre between the tyre size and the wheel size it is a cross-ply.

Radial:   A later design perfected to cope with the increased performance and handling capabilities of modern bikes. The plies are laid across the tyre at a 90º angle to the bead. This gives a more flexible but weaker sidewall, the amount of flex being controlled easily by varying the aspect ratio (size) of the sidewall, as required to suit the needs of the tyre and the bikes it is designed for. The addition of a belt or belts around the plies gives a stiff tread, so you have a tyre suited to fast bikes and high lean angles. They are generally more expensive but have a lower rolling resistance and are therefore likely to use less fuel and will build up less heat at speed. The belts give a stronger tread that is less prone to damage and will deform less at speed but will absorb less shock. Radial tyres are marked ‘R’, as in 160/55-R 17.

Bias-belted:   A cross-ply tyre with a belt or belts around the tread, giving a strong sidewall and a stiff tread and making the tyre less prone to deformation at high speed. A design compromise giving characteristics of both radial and cross-ply that suit heavier high performance and load-carrying bikes that are not ideally suited to either cross-ply or radial tyres. Bias-belted tyres are marked ‘B’, as in 160/55-B 17.

The compound of a tyre refers to the rubber bit that contacts the road. A synthetic rubber is made from a blend of petroleum, sulphur, carbon black and silicone. Blends vary to suit the requirements of different bikes and give different tyres their own characteristics.

There are three basic compounds, soft, medium, and hard. A soft compound gives the best grip, a hard compound lasts the longest, and a medium gives a balance of both. In reality there are an infinite number of compounds, because the ingredients can be blended in many varying proportions, depending on the requirements of the tyre. For example, a soft tyre with more silicone may be better in the wet than a soft tyre with less silicone but may not perform as well in the dry. Some tyres have more than one blend, with a harder compound in the middle of the tyre, where most riding is done, so it lasts longer and prevents the tyre squaring off, and a softer compound on the sides for better grip when cornering.

We all want the ideal combination of grippy rubber that lasts for a long time at a reasonable cost. But there is no perfect solution, everything is a compromise, and generally the more grip you have the more a tyre will cost and the less mileage you can expect from it. Tyres have become very specialised, and motorcycle manufacturers work with the tyre manufacturers to produce tyres as ideally suited to particular bikes and uses as they can. Tyres are also made and used by customs builders to add to the aesthetics and style of a bike, a particular example being the use of off-road style tyres on urban street bikes. The end result is that the lucky consumer is presented with a vast array of choices to cater for all needs.

The tread on a road tyre has two main functions, to allow the dispersal of water on wet roads and to allow movement in the compound to encourage it to heat up. The pattern of the tread influences how the water is dispersed, but as there are so many different patterns used by the various manufacturers it is difficult to say why one is better than another, and design probably has as much to do with aesthetics as anything else. The amount, width and depth of the tread determines how much water can be dispersed and is a good criterion for tyre selection according to when and how you use your bike. It also affects how much movement there is in the tread, and this influences how quickly a tyre warms up. 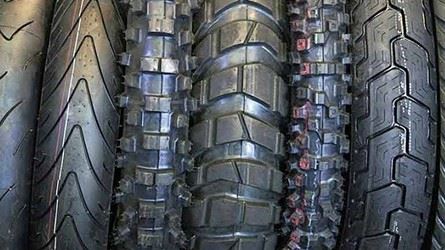 Tread patterns come in all shapes and sizes

The knobbly tread on an off-road tyre is designed to dig into and grip loose and muddy surfaces and is cut wide and deep to prevent clogging. When used on the road a knobbly tread has reduced grip and can cause vibration, and because it can move around a lot there is a danger of the tread tearing up if too much power is applied, and of overheating at speed. The rise in popularity and dual on/off road aspect of adventure bikes makes tyre design complicated and has resulted in a range of tyres to cater for both uses, with compounds and tread patterns dedicated to the amount of each use you require. Of course, many adventure bike riders never go off road, but if you commute during the week and go green laning at the weekend on the same bike and all year round it can be difficult to work out what is best. Good excuse for having two bikes!

To see the full range of tyres available from MPW, along with our selection of tyre accessories such as warmers, inner tubes, tyre levers and pressure gauges, browse the motorcyclepartswarehouse shop.